Setting Up the Work Environment

I couldn't wait any longer! I dusted off my Macs and booted them all up to make sure I wouldn't spend the whole month fixing hardware. They all work! 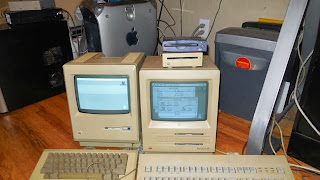 Basically, I will be using a PowerMac G4 to do the software development and the Macintosh SE for initial testing. I decided to do testing on the Mac SE for a few reasons:


This should make testing much less painful. If I get anything working on the SE, I can give it a try on the Mac 128K. I have an external SCSI zip drive that seems to work well as an external harddrive (and lots of zip disks!).
Read more »
Posted by epooch at 7:02 AM No comments:
Labels: Macintosh, PPPd, RetroChallenge_2014WW, RS232

Gearing up for RetroChallenge!

These beauties just came in the mail: 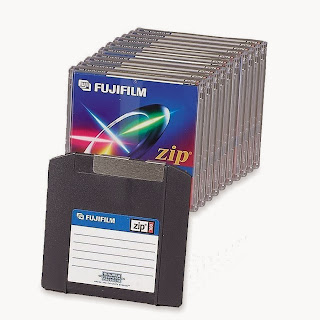 Why buy one when you can buy 10 at 10 times the price? $20 on ebay seemed like pretty good deal. I've had good luck with zip drives. They are easy to find at thrift stores, and protocols span from SCSI to ATA to USB which makes them good for data transfer between old and new systems. They work great as a boot drive for classic macs (back to the Macintosh Plus) and let you organize a lot of data in a small space. I've had enough CDs fail that I actually prefer these guys for long term storage of retro software.
Posted by epooch at 6:11 PM No comments:
Labels: Macintosh, RetroChallenge_2014WW

I have again entered the RetroChallenge! This time I will be using my Apple Power Macintosh G4 500 DP from the year 2000 to compile some programs. Now, even though this computer is technically eligible for the RetroChallenge, the real "retro" part is that the program I will be compiling is for the Apple Macintosh, as in, the original 128K Macintosh from 1984. I will be using the Classic Environment of Mac OS X 10.4 running MPW as my development environment. 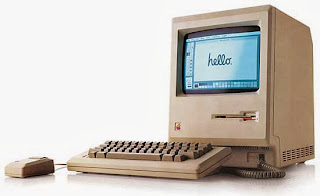 As for the programming, I will attempt to port the lwIP TCP/IP stack to the original Macintosh. This Macintosh is unique because it did not have enough memory to run any commercially available networking stack. Even the 512K Macintosh had some networking possibilities. I attempted this project a number of years ago but couldn't get past the multi-thread requirement of the lwip PPP implementation. As far as I know, the original Macintosh operating system does not have any multithreading libraries or routines. I recently noticed that a branch of the lwIP code includes a PPP module that claims to not require multiple threads! So I will give this another shot. If PPP fails, I can try to get SLIP working instead.

Here is my target hardware/software flow:

Having worked on this before, and having struggled to understand how to use the code, I have a feeling I will get stuck at some point. If that happens, I will probably work on building a ROM burner to flash some Apple II ROMS or work in my Apple IIgs.