After much experimenting, I figured out that an unusually low usb timeout setting was causing usb transfers to stall on the Raspberry Pi. After I raised that, I was able to easily load disk images! Unfortunately, Karateka does not work. During the boot sequence, Karateka does a very quick jump from track 7 to about track 27. It is cycling the Disk ][ phase lines very quickly to make this happen. Unfortunately, I don't think the Raspberry Pi Zero is currently able to sample the USB data fast enough to keep up. As a result, it is only jumping to track 15 or so. I was having a similar problem in earlier versions of a2usbdsk. I tried some tricks to speed things up, to no avail. But, good news is: 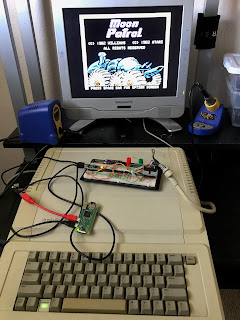 So, as a proof of concept this is looking good. I should be able to move on to step 2 and get this running on the Raspberry Pi's native SPI port.

Posted by epooch at 1:22 PM No comments: Links to this post
Labels: a2usbdsk, Disk ][, raspberry pi

a2usbdsk not working on Raspberry Pi yet

Although my Apple IIe Platinum was not working correctly, I remembered that the color pattern I was seeing was actually a self-test mode that the Enhanced Apple IIe goes into without a keyboard connected. My keyboard was connected, but was also shattered and seriously damaged. Fortunately, another Apple IIe keyboard saved the day.

Unfortunately, a2usbdsk on the Raspberry Pi is not able to send data fast enough for the Apple IIe to read... yet. I have some code optimizations I need to test out which I think may help the situation. That said, even my old MacBook air was barely able to keep up. My newer 1.8 GHz dual-core Intel Core i5 MacBook Air seems to have no problem. I'll keep trying this weekend.

The Raspberry Pi is able to keep up! The problem is that the FT232H is stalling very often. I had this problem early on in the development of a2usbdsk on Mac OS X, but I worked around it by writing most of my own read/write loops and avoiding libmpsse for the most part. There must be some difference in how libusb or libftdi is handling the packets on the two operating systems. By frequently purging the buffers, I was able to get a disk to load! Need to find a better solution though. More testing should narrow down the problem.

Posted by epooch at 10:34 AM No comments: Links to this post
Labels: a2usbdsk, Apple IIe Platinum, raspberry pi

I was able to port a2usbdsk to the Raspberry Pi quite easily due to it being based on libusb and libftdi. Really, I just had to set up a makefile. I had some issues getting it to open the FT232H though. libmpsse does not return any errors when attempting to open an FTDI device. This makes troubleshooting very difficult and frustrating. After adding some logging, I determined that the libftdi function ftdi_usb_open_desc_index() was returning error code -8, "get product description failed". Getting the product description is a pretty simple function and that error was not appearing on Mac OS X, so it left me baffled for a while. In the end, the issue was that Raspberry Pi/Linux strictly controls who can access USB devices. "sudo" got it running, but setting up a udev rule seems to be a better solution.

I have not tested this with a real Apple II yet, as my Platinum Apple //e was pretty much destroyed in a recent car accident due to air bag deployment. The case is shattered, but it may still work. I'll try this weekend.

Posted by epooch at 10:10 AM No comments: Links to this post
Labels: a2usbdsk, Apple IIe Platinum, raspberry pi 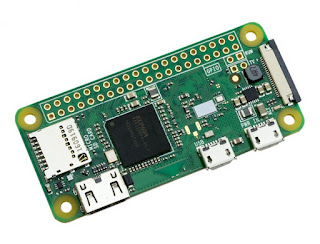 I received my first Raspberry Pi in the mail today. It is a Raspberry Pi Zero W. I am excited to really try it out. I have it running, but I need to get a USB keyboard and mouse hooked up to get everything installed.

The Raspberry Pi is pretty neat hardware that bridges the gap between a micro controller and a full desktop computer. I have done some micro controller development, but never got really engaged with it. Development on the Raspberry Pi looks a little more my speed. At $10 for the Raspberry Pi Zero W, it is significantly more powerful and cheaper than the Mega AVR Arduinos and the necessary add-on cards. Most of the cool stuff is already built in to the Pi!

So, my hope was to port a2usbdsk to Raspberry Pi, so that people never have to use 5.25" disks again. I love the nostalgia, but they are cumbersome to use and ADTpro transfers to and from the Apple II are fairly slow. Don't get me wrong, ADTpro is a wonderful piece of software that I have used and quite a bit myself. But if you don't want to actually use disks to use disk images on your Apple II, it seems like the wrong solution, and a piece that is missing in (and could easily supplement) other packages like Ivan Drucker's RASPPLE II.

To pull this off, I am going to attempt it in 2 steps:

I am very concerned that the Raspberry Pi may not be able to analyze the incoming data fast enough from the USB adapter. There is quite a bit of latency between transmissions to the disk drive that I was barely able to overcome on my MacBook. This puts a long gap between sectors which the Apple II is pretty good about ignoring, but it will eventually give an I/O error.